A fun early spring struggle with the elements. 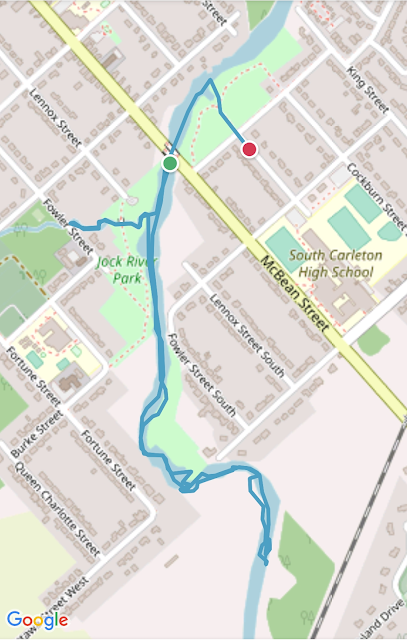 In the fall of 2019, my daughter and I put in to the Jock River at the Richmond Conservation Area and found that the bridge at McBean Street was under construction so you could not travel past the bridge. Bummer. So we tried going downstream (north) instead … but only got a few hundred meters, the water was low and we were bottoming out everywhere.

Undaunted, we put our kayaks back on the car and drove a few blocks to Jock River Park to put in there. Unfortunately, you could only navigate a couple hundred meters upstream before you hit some low-water rapids that were unnavigable. So… we set it aside and planned to try again in the spring.

I actually did go back in April 2020, and it was pretty fun. Turns out this stretch is the site of the end of the Jock River Race, which I did not know about at the time.

On April 20, 2020 I put in once again at the Richmond Conservation Area. It was a sunny day but only 6 degrees. I wore gloves and a jacket and had the river to myself The water level was at about half a meter higher than it had been in the fall, and there was a shiny new bridge just begging to be kayaked under!

The brand new McBean Bridge over the Jock River. Nice!

Past the bridge you see Jock River Park on the right, I couldn’t resist the lure of paddling up the creek running through Jock River Park. How far could I go? 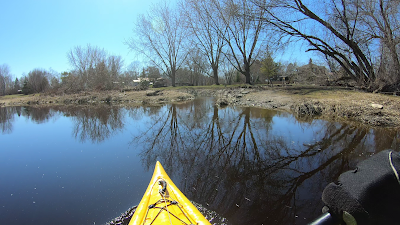 First I paddled under the pedestrian bridge in the park. 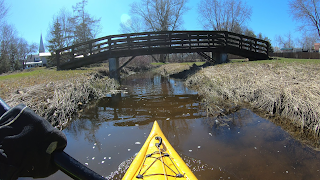 Then I seemed to exit the park and passed a woman with her dog raking her lawn to my left. Felt a little invasion of privacy-y.

Soon after that I came to a bridge that I later learned was Fowler Street. There was a small ledge that I was not able to skooch up and over - the current was actually pretty strong. 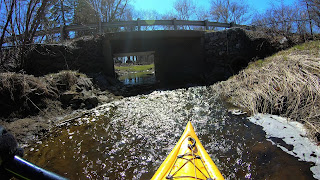 I had the feeling I would end up kayaking through peoples' backyards if I kept going, so I turned around and let the creek carry me back to the main event - upstream on the Jock River!

Into the teeth of the jock river

The view back at the river was idyllic, and nothing like the jumble of rocks I remembered seeing during the low water conditions of the previous fall.

However, it wasn’t long before I was working hard to push against the current. 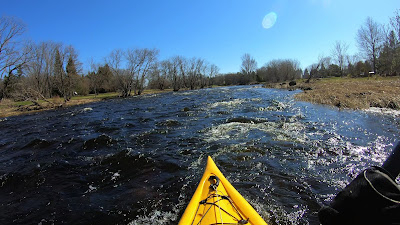 I spent a fun hour working my way upriver before I ran out of gas and turned around. It was a lot of fun, and didn’t feel dangerous to me but I’m not an authority. I was definitely banging my kayak around a bit, and the currents are strong.

Sometimes I found that I was able to get upriver but working along the edge of the stream where the flow was less. And there were a couple points alongside the Brown Natural Area where I needed to portage around a particularly rough patch.

Eventually I reached the end of the line - couldn’t paddle up any further, and partaging would not have been easy. 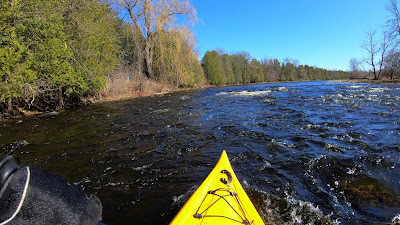 When I finally turned around the current carried me home quickly.

This outing was about challenge and fun, not speed, and it delivered! I’d give it 4.5 stars but I think it’s only really possible in early spring - of course each year may be different. I spent 1:40 on the water and went all of 4k, taking 45m to work up the rapids and floating back down in 11m.

Main takeaway: make sure to hit the Jock River again next April - it’s so much more navigable in the early spring!